You can find the pretties flowers growing wild sometimes in the most unusual locations. There are these really pretty purple flowers, which I now know are called larkspur, growing in the back ally of Brian's house. I've had my eye on them for awhile and finally decided it was fine to cut a few branches of to use in an arrangement. I recruited Jacqueline, Brian's sister, to come with me and take some pictures. She is an amazing cook, check out her awesome blog http://www.CookingWithJax.com.

I only cut off three branches of larkspur to use in a simple arrangement. If you look closely  you will notice there were too different types, darker purple with white center and lighter purple with black center. I took two of the darker purple and one of the lighter purple, the contrast makes them look great together. They are really pretty, and the best part is they were completely free.

I only cut three stems and I put them all together in a tall thin base with some thin grass I had left over from a previous arrangement. 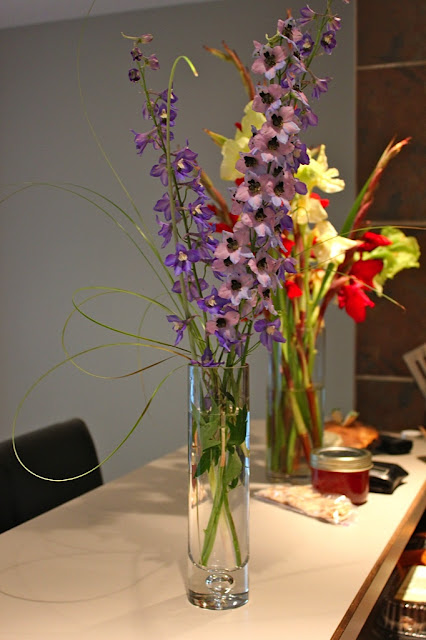 I love the pastel purple of the larkspur flowers. It's soft, feminine and fresh look is great for the bathroom. It creates that spa like feeling in a bathroom. 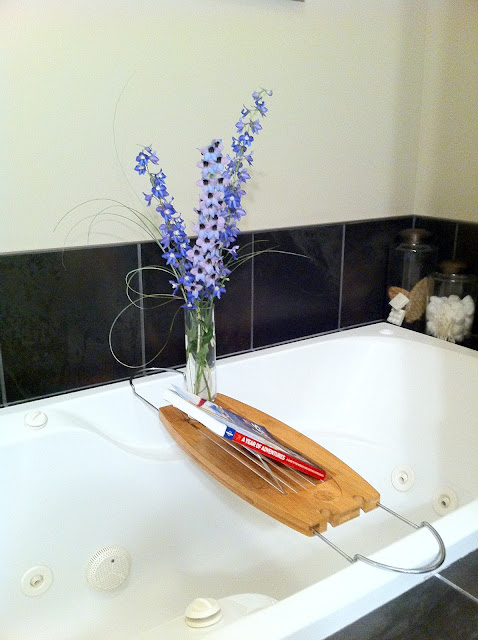 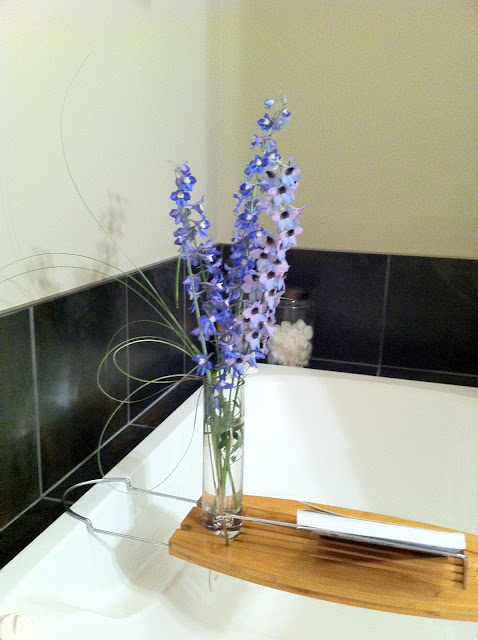 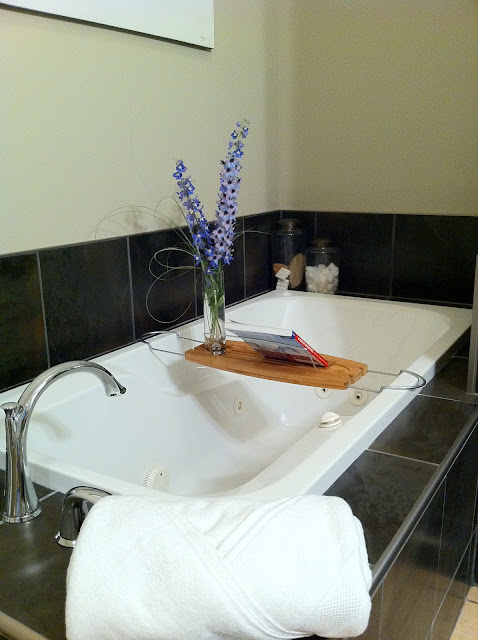 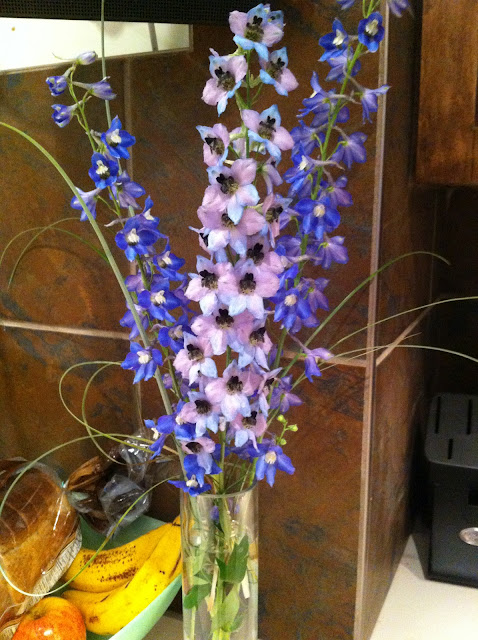 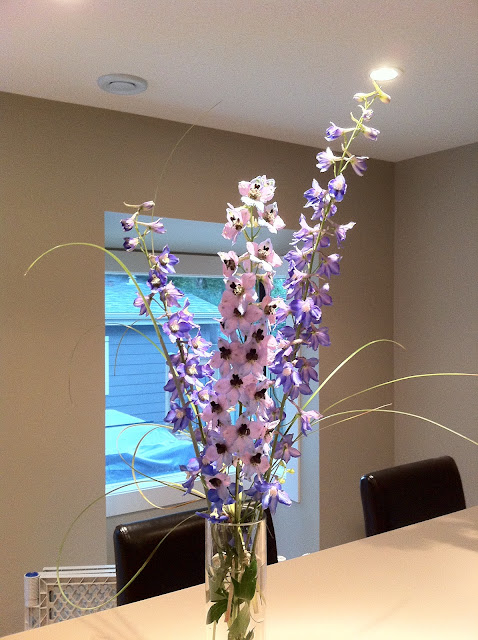 While grocery shopping I always like to go to the flower section and enjoy the different flowers they have on display. Sometimes if there are really pretty ones or some on sale I'll grab a few to take home.

As I mentioned on my cute cube post I bought a couple of flower bouquets from Soveys a few weekend ago. I took flowers from both bouquets to mix and match and make a few arrangements around the house. 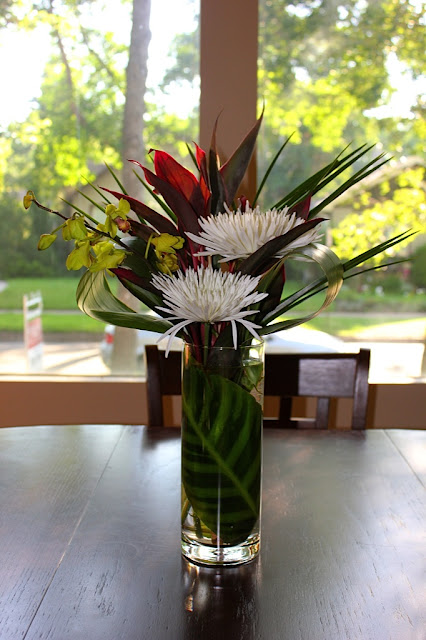 I mixed and matched the flowers and foliage from both bouquets bought at Soveys to make four different arrangements. I also used the green orchid and zebra leaf that I had previously used in my post of orchids.

Each bouquet cost $14.99 so I spent $30 in flowers to make beautiful arrangements for the whole house.

For the bigger arrangement I took one of my big round vases bought at the dollar store for $2.00. I used the zebra looking leaf that came with my orchids I had bought a week earlier to line the inside of the vase. I then cut up the big green tropical leaf (don't know the name) to the proper length I wanted and I also removed some of the pieces that would have folded up inside the vase. I placed it in the vase and added the beautiful purple leaved stem (also don't know name) and bird of paradise cut to proper length. I then placed the big green leaves folded up in each side, making a frame for the purple leaves. I cut up the two big spider mums and placed them in beside each other at different heights to create dimension. I added the green orchids last to add that extra bit of color and sass. 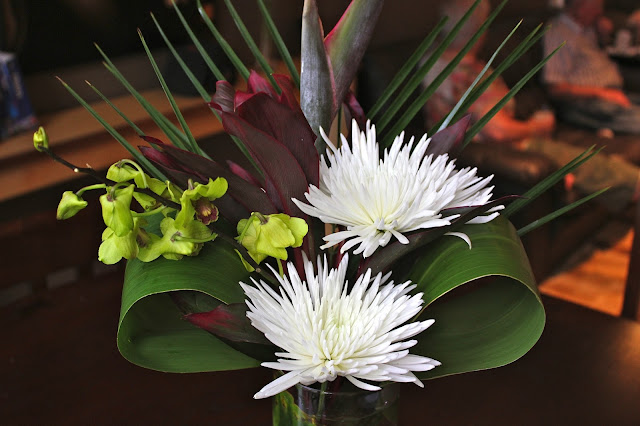 I used the cut up pieces from the tropical leaf in the second arrangement, added the pretty red daisy, orange and yellow flowers, tiny white spider mums that were part of the branch and the green little flowers all cut the proper size. 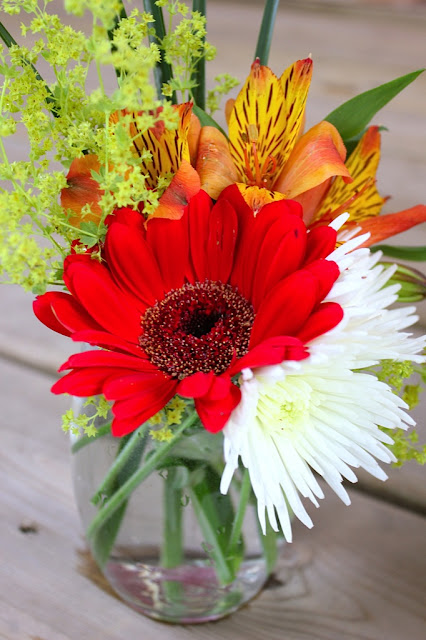 For the third arrangement I took just the orange daisies with some baby breath and grass I still had from a previous arrangement and placed them on my pretty contemporary vases. 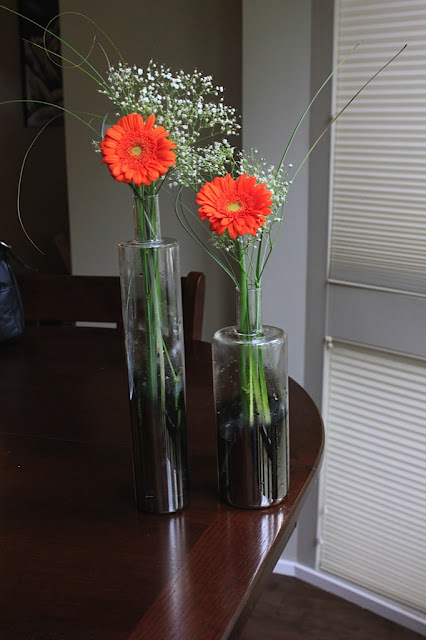 The forth arrangement was already featured in the cute cube post. You can check it out at http://www.thesassypetal.com/2012/07/cute-cube.html.

The lilies that came in the bouquet were not in great condition so I just took the best two flowers and added them to a simple drinking glass with some baby's breath and placed it on my nightstand. 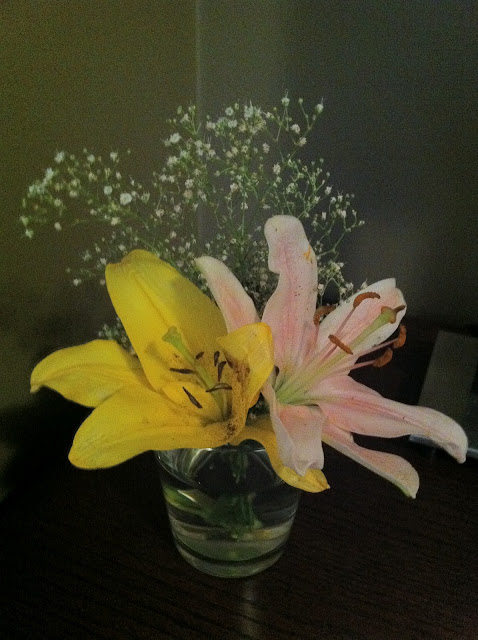 I really enjoyed creating  all these arrangements with the two bouquets. I had to use what flowers I had at hand and I think they all turned out really pretty. 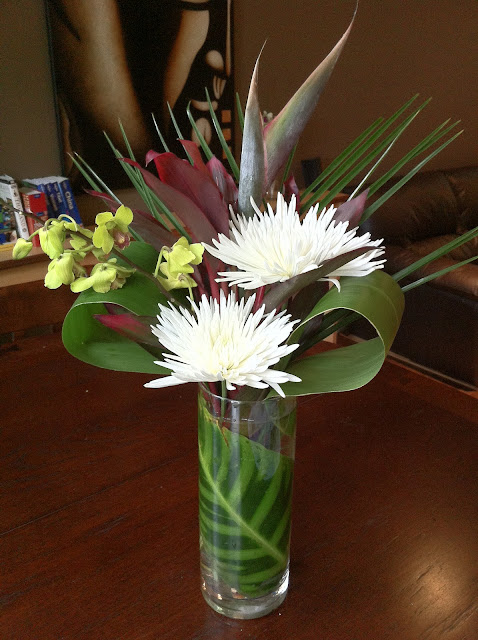 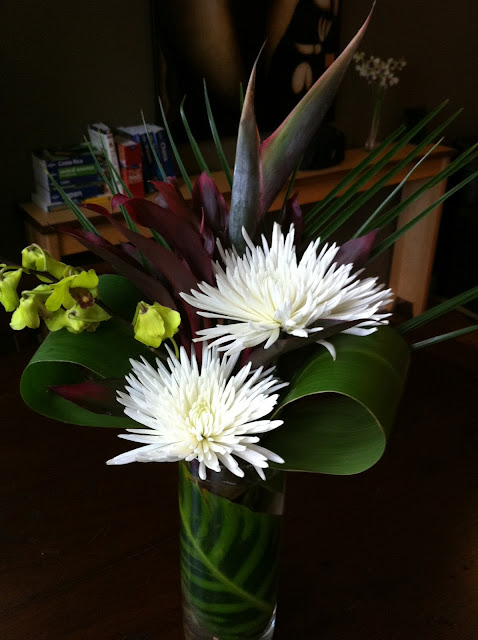 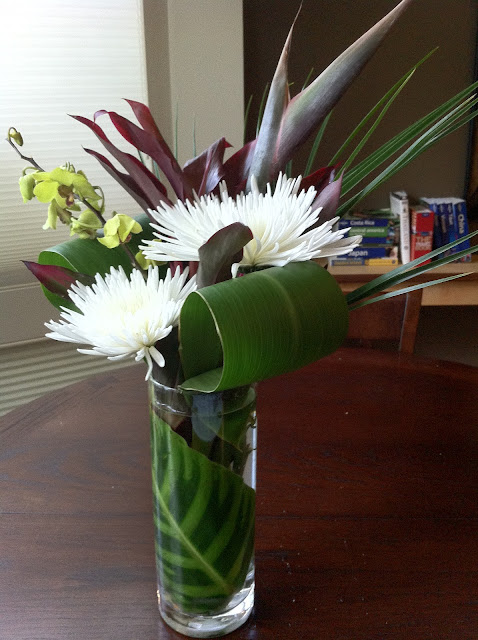 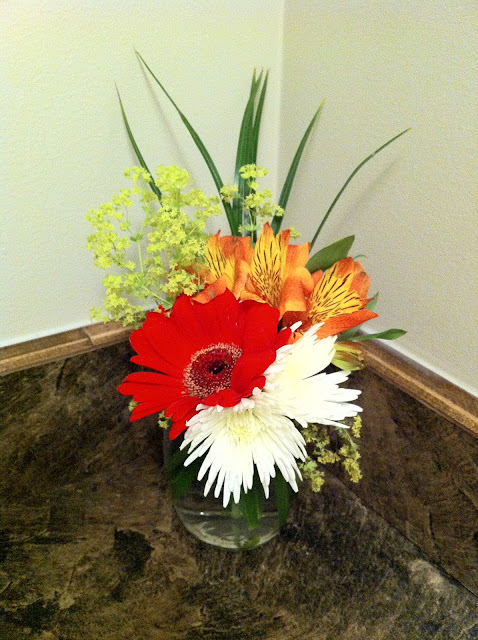 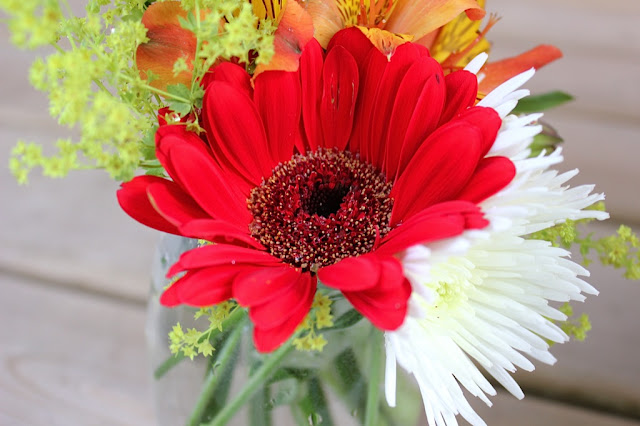 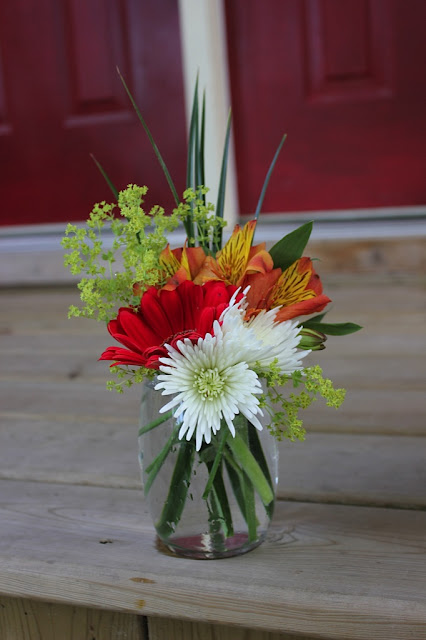 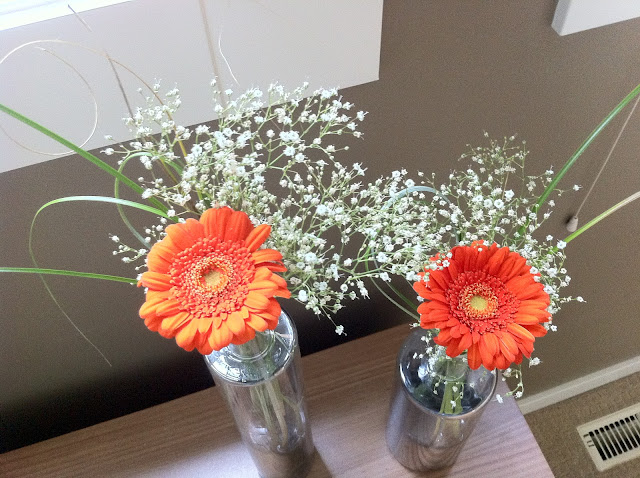 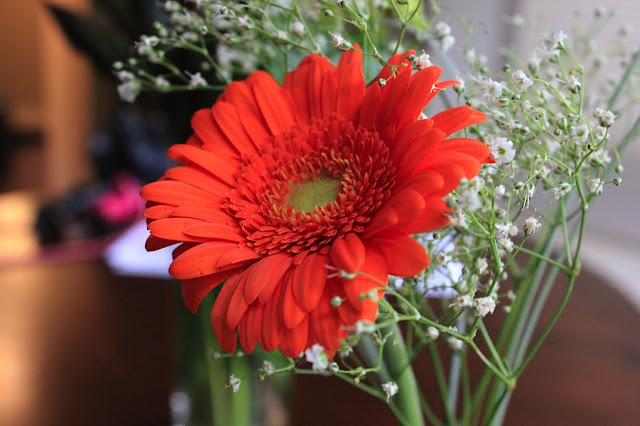 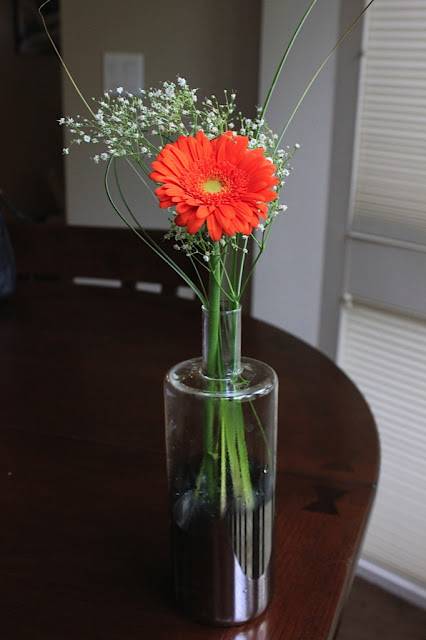 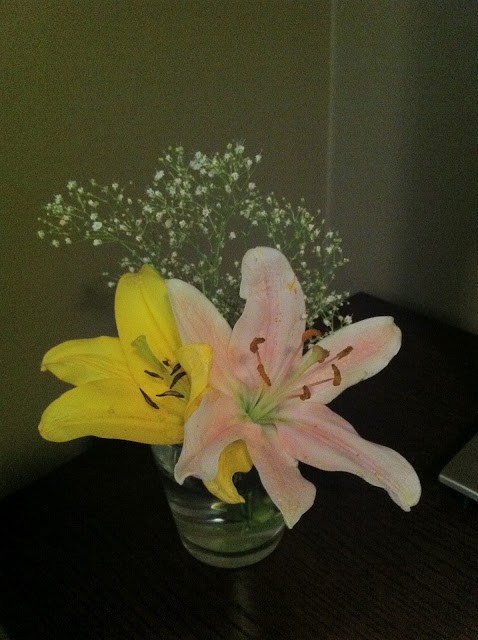